River scientists conduct Stream Geomorphic Assessments (SGAs) to study the health of a river system. These studies help us learn many important factors about the natural environment and the human impact on it over time. Through three phases of assessments of increasing detail SGAs help us learn about the quality of aquatic ecosystems, the history of human river management, and the presence of erosion and flood hazards. SGAs help town and regional planners make informed and strategic decisions about the best ways to protect, manage, and restore watershed resources (ANR, 2012). Stream Geomorphic Assessments focus on understanding rivers from a natural systems thinking prospective. This means that all of the factors that affect a river ecosystem are studied from a watershed scale to a river reach scale, a reach being a section of river—typically less than one mile—that share similar characteristics such as slope, channel width, and bed material.

To read more about the watershed level factors that contribute to flood hazards please visit the Watershed Page.

Historic and Present Land Use:

All flood hazards are related to the historic and present land use along the river corridor. European settlement of the rugged topography of the Green Mountains was inextricably connected to the region’s river systems, which provided both transportation routes and hydropower. Road and rail networks sought routes of least topographic resistance and snaked up river valleys. Where a dam could be built or where the river dropped over a falls, hydropower—first for sawmills and later for textiles and marble—was generated. For the past 150 to 200 years humans have altered nearly every component of Vermont’s fluvial systems (Kline and Dolan 2010). In many areas it is easy to see the legacy of this development in riverside towns and roads. In other areas, however, it is more difficult to recognize historical alterations to rivers. By using historical data, aerial photography, and field visits SGAs study where rivers were altered and how human river management as a constant, ongoing process has maintained these historic alterations. A short comment on the history of each river reach can be seen by hovering over each river segment.

Encroachment in the River Corridor:

The most apparent impact that historic and present land use brings to rivers is encroachment on the river corridor. Rivers are dynamic systems that are constantly working to wander within the valley bottom through the erosion and deposition of sediment. Encroachment on the corridors in which rivers move can confine rivers to unnatural locations and conditions.  This often limits meanders and access to flood plains that help the river dissipate its energy. Areas of encroachment not only endanger structures within them, they also pass flood hazards downstream. A short comment on the level of encroachment in each river reach can be seen by hovering over each river segment.

Straightened sections of the river are marked in red on the map. The unnatural sharp right angles in the river channel near the Pittsfield downtown show intense channel straightening.

When roads and buildings encroach on the river corridor straightening often occurs. Straightening of the river channel often takes place to move the river out of desirable farmland, away from homes, or to make room for a road. Historic straightening and snagging of tributaries was also done so that logs could be floated from the headwaters down to the valley mills. When a river is straightened the gradient of the river steepens and the river channel has more power. This increased power passes erosion hazards downstream as well as eroding the river bed. This bed erosion can incise the river and disconnect it from its flood plain compounding the issue.

Bank armoring is when river banks are artificially hardened, usually with riprap, to prevent erosion. The problem that arises with riprap is that because it prevents erosion in one area by deflecting that waters power it can unintentionally cause greater erosion on the opposing bank or downstream. Channel straightening and bank armoring are two processes that go hand in hand in the degrading cycle of river management because as straightening causes more erosion more bank armoring is needed to protect human investments, most commonly roads. 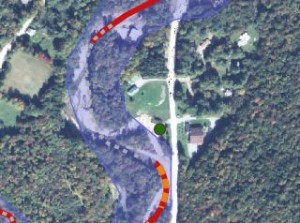 Armoring along Rt. 100, marked in orange, near the Halligan home contributes to erosion downstream, marked in grey.

Bank armoring also contributes to channel incision. Armoring is marked on the map with orange dashes; it is interesting to look for the relationship between armored banks and erosion downstream.

When a river has more energy than is needed to move available sediment then it will acquire more sediment by eroding its channel or banks. Though erosion is a natural process in a river when a reach has been straightened or confined excessive erosion can occur.  Catastrophic bank erosion can occur rapidly during floods as was seen at the Halligan residence in Pittsfield. Gradual erosion, however, can also cause great damage especially when a channel has been deepened through incision or dredging. When a river bed is deepened the banks will erode and collapse to fill the holes created in the river. Erosion is marked on the maps in grey, look for the relationship between areas that are eroding and areas that have been straightened or armored.

The Fives Stages of the Channel Evolution Process (Source: http://www.fairfaxcounty.gov/nvswcd/newsletter/enjoyrestorestreams.htm)

A key part of the SGA is combining all of the assessed factors for a reach and determining its geomorphic condition. The complicated geomorphic condition of a reach can be summarized through its phase of channel evolution a rating of the “stream sensitivity.” These ratings can be seen in the map by mousing over the river reaches in the Stream Assessment layer.

-Reference/Good Condition: This means that a river is in dynamic equilibrium which involves localized change to its shape or location while maintaining the fluvial processes and functions of its watershed over time and within the range of natural variability; and provides high quality aquatic and riparian habitat with persistent bed features and channel forms that experience periodic disturbance as a result of erosion, deposition, and woody debris.

-Fair Condition: This rating is for a river reach that is in adjustment. The river has experienced changes in channel form and fluvial processes outside the expected range of natural variability; may be poised for additional adjustment with future flooding or changes in watershed inputs that would change the stream type.

-Poor Condition: This rating is for a river reach that is in active adjustment and Is experiencing adjustment outside the expected range of natural variability; is exhibiting a new stream type; is expected to continue to adjust, either evolving back to the historic reference stream type or to a new stream type consistent with watershed inputs

About the Ratings: Though stream sensitivity ratings can tell us much about the erosion hazards that may be present in a reach the Agency of Natural Resources does include a disclaimer about these ratings: “Stream sensitivity refers to the likelihood that a stream will respond to a disturbance or stressor, such as a change to the sediment or flow regime.  Some streams are more likely to be in a measurable state of change due to their setting within the watershed and impacts from humans.  Stream sensitivity ratings are used to determine appropriate river corridor meander belt widths.  Stream sensitivity alone is not an indication of an active adjustment process and does not equate to a flood risk level; the appropriate river corridor plan should be consulted for further details on the physical condition of a specific reach of river.” (ANR, 2012).